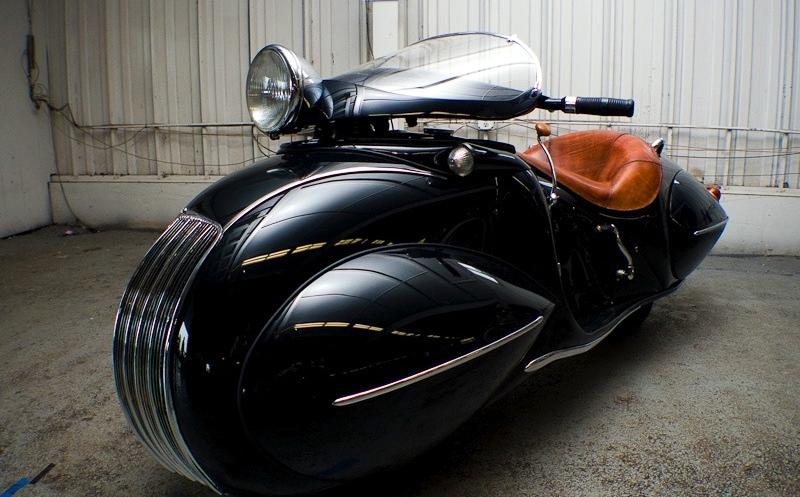 The motorcycling world loves a ‘barn find’, an old, obscure machine wheeled out of the woodwork for the first time.
And this is one of the biggest revelations of recent months.

<< One night in March, 1950, O. Ray Courtney worked until two a.m. and drove home discouraged. He was trying to design a better motorcycle. He wanted one with the seat forward, with better cooling, better springing and a more beautiful body. Discarded sketches littered the floor of his shop.
It’s a 1930 Henderson that was customized before WW2 by a fellow called O. Ray Courtney and fitted with ‘streamliner’ bodywork.
That night in a dream he saw a steamlined beauty skim across a flowered field. Too excited to report for work the next day, he hastily put his dream on paper – and he is riding that dream cycle now through the streets of Pontiac, Mich >>

It’s all the more unusual because the mechanicals are hidden: even at the height of the Art Deco movement, most motorcycles were a triumph of form over function, with exposed cooling fins, brake drums and suspension springs.
The art deco influence is obvious; legendary automotive designer Harley Earl could have drawn those curves.
The bike is owned by collector Frank Westfall of Syracuse.
It caused a stir in June 2010 when it appeared at the Rhinebeck Grand National Meet, a motorcycle show held a couple of hours drive north of NYC.

<< I took these photos at the Rhinebeck Grand National Meet where the newly restored bike was unveiled. The bike belongs to Frank Westfall from Syracuse, NY. According to some info I found online, the bike was originally built by O. Ray Courtney in 1936 and is based on a 1930 K.J Henderson. The bike is powered by inline four cylinder (not a scooter as some have said, check the shot of the motor below) and as I’m sure you can gather by now, is a one-off custom. What I can confirm is it does run and while it looked a bit unwieldy, Frank could be seen riding the bike around the Fairgrounds all weekend. But let’s be honest here (and maybe I’m wrong) – you don’t have this bike in your stable to go out for a long Sunday afternoon ride to get some ice cream. That said, it was pretty awesome to see the bike being ridden (even when rain started to come down) instead of being sheltered behind a velvet rope, never to see the rubber touch asphalt again. The bike is a fantastic piece of history, the craftsmanship is absolutely stunning and it’s surely more of a museum piece than a daily rider. Frank has obviously spent an incredible amount of time meticulously restoring and rebuilding the bike to its current gorgeous state. Hats off to Frank for the amazing work he did and for sharing it with all us gawkers. Frank, if you see this and want to send in more info about the bike, I’d love to share it >>

Grail Mortillaro (of the chopper blog Knucklebusterinc) had a camera to hand, so we have him to thank for these images.

It went bust in 1931.
Henderson was a Chicago brand and one of the American ‘Big Three’ (with Harley-Davidson and Indian) until the onset of the Great Depression.
But you can see the influence of the ‘streamliner’ style on another contemporary North American brand : Victory.
If there’s a spiritual successor to this Henderson custom, it’s the Victory Vision Tour, a gargantuan cruiser with completely enclosed bodywork and not a leather tassle or saddlebag in sight.
Chris Hunter of motorcyle design website – Bike EXIF. 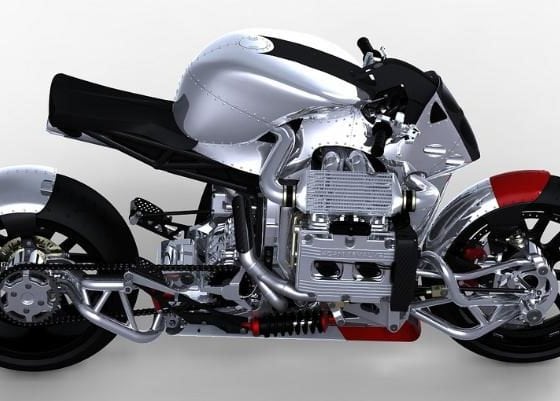 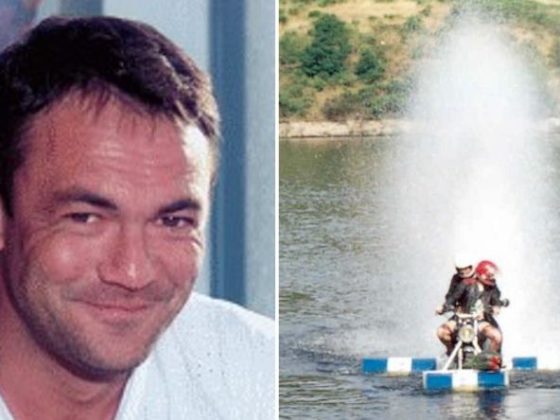 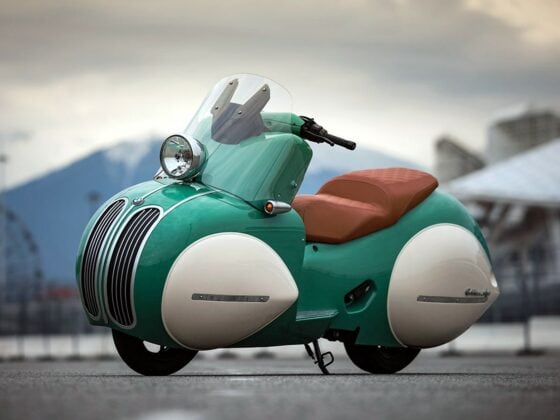 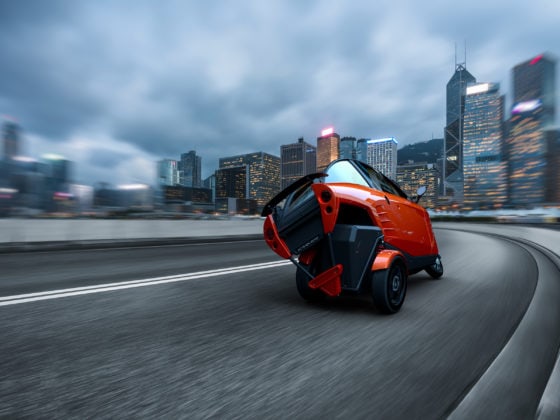 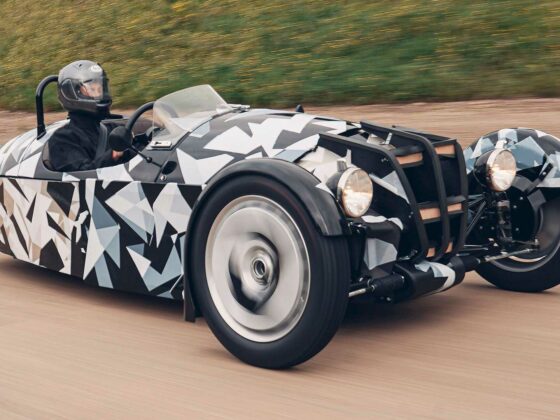 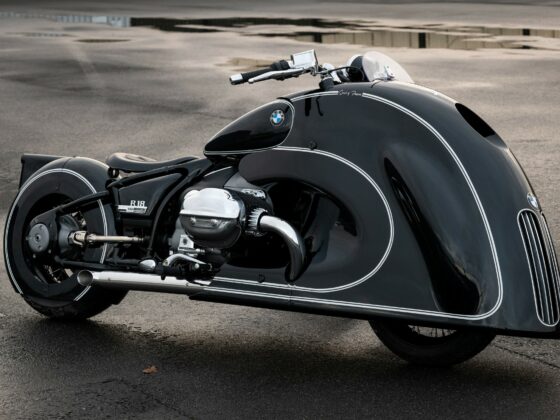 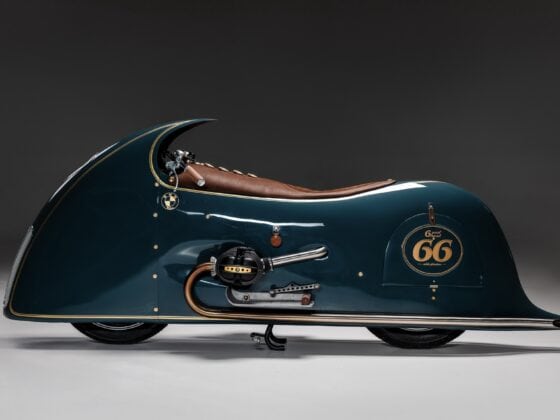 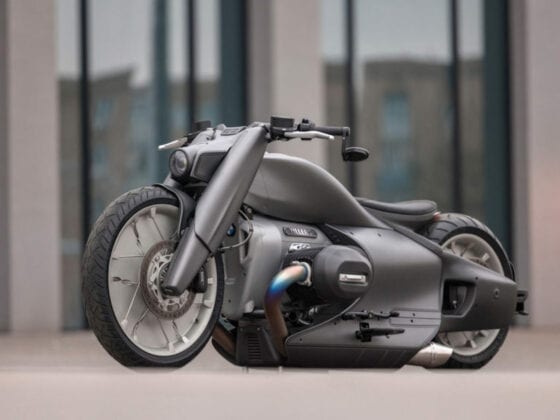 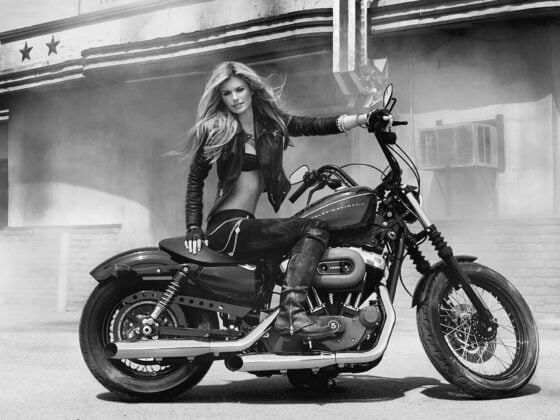 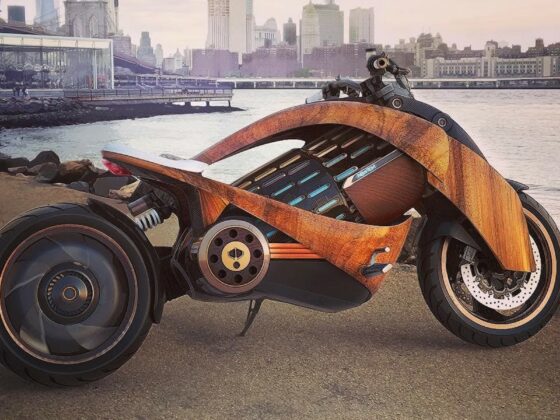 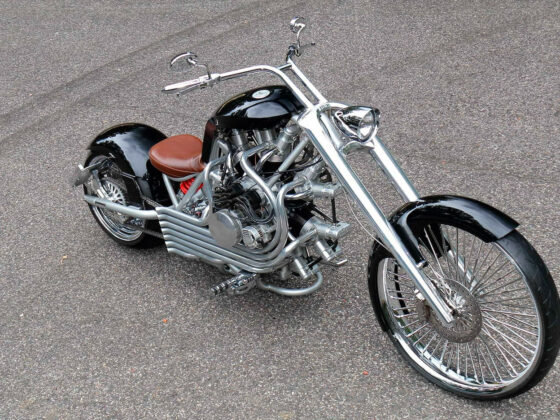 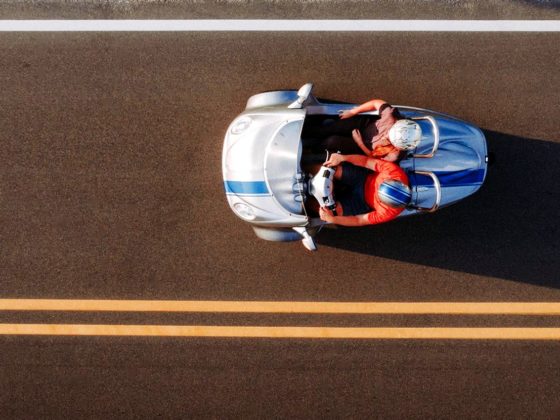 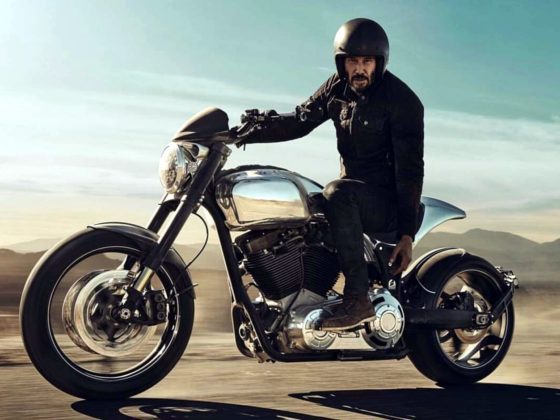